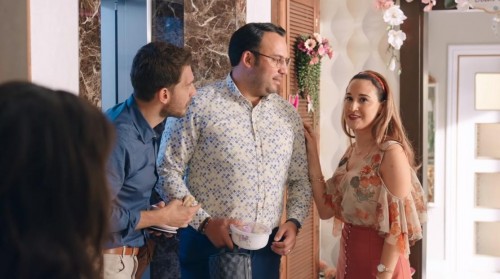 Kurzinfo: Fatih (35) has fallen in love with Gizem (30) upon seeing her on the Instagram page of a friend from university. After meeting in İstanbul, and Gizem’s home town Rize, they have decided to get married in a flash. Fatih’s family is from İstanbul. His father has inherited a plot of land in the Yeşilköy district, which he has given to a building contractor in a flat-for-land deal in exchange for two small, two-room apartments as well as a large apartment with a terrace on the top floor, in which he lives with his wife. Fatih’s older brother Selim (40) and his wife Sultan (34) live in one of the small apartments. Not to pay rent, Fatih will move in to the opposite apartment when he gets married. Having always dreamed of getting married and not intending to work, Gizem is more than pleased with the situation. And her mother-in-law is a sweet woman. Having owned an accessory store for many years, her father-in-law is tired of women’s talk, and speaks very little. Gizem and her co-sister-in-law will be opposite neighbors. What could ever go wrong? Having married into the same family, they can perhaps support each other and get along very well. But that’s not how things will turn out. Before long, her co-sister-in-law Sultan awakens the devil inside Gizem with her annoying, jealous and provocative attitude. Unable to get along at all, the two women get caught up in a dogfight. And the race to give the family its first grandchild will only further complicate the conflict. When they hear their mother-in-law tell a neighbor that they will give the large apartment they live in to whoever has the first baby, the two women who weren’t thinking of having a child for some years to come get to work on getting pregnant as soon as possible. They both race to give birth before the other, and grab the prize. Their husbands will be bearing much burden throughout their pregnancies. But when the babies are finally born, the two co-sisters-in-law will earn more than motherhood. (Verleih)